White Springs was a Seneca Haudenosaunee (or Iroquois) town site occupied from approximately 1688 to 1715. The site is located near the present-day city of Geneva in Ontario County, New York. The White Springs Project was initiated by researchers from Cornell University and Ithaca College and Seneca partners in 2007 to use domestic-context archaeology to examine the local consequences of turbulent times. Research particularly focused on the impact of warfare and challenging political-economic conditions on Seneca community structure, house forms, and material practices. The project also has extended the domestic-context archaeological database for the eastern principal Seneca community to three consecutively-occupied sites, bridging the copious (but understudied) data from the preceding Ganondagan site (occupied circa 1670-1687) and information from the subsequent Townley-Read site (circa 1715-1754). Archaeological, textual, and cartographic data from these three sites document thoroughgoing cultural changes in the history of a single community.

Cornell-sponsored fieldwork took place at White Springs between 2007 and 2015.  It consisted of shovel-test, test unit, and trench excavations, and surface investigation in plowed portions of the site. Ithaca College researchers conducted a multi-instrument, high-resolution archaeogeophysical survey of an area of over 12.4 acres (5 hectares) in and around the site. Fieldwork at the site was conducted in collaboration with representatives of the Seneca descendant community, who reviewed the Project’s field methods and opted for a minimally invasive approach; the project excavated less than one percent of the domestic area of the site. Cornell University’s American Indian Program (now the American Indian and Indigenous Studies Program) provided full-tuition scholarships for Native students to attend the White Springs excavations with the goal of building archaeological capacity among Indigenous communities.

The project is currently in the process of cataloging, analyzing, and writing up an account of the artifacts, animal and plant remains, and spatial information recovered from the site. Results from the White Springs project will be published as a multi-author, multivocal book that will include the perspectives of Indigenous academics, Seneca community authorities, and archaeological specialists. The artifact assemblages from the Cornell excavations at White Springs will be transferred to the Seneca-Iroquois National Museum in Salamanca, New York, for permanent curation following cataloging and analysis. 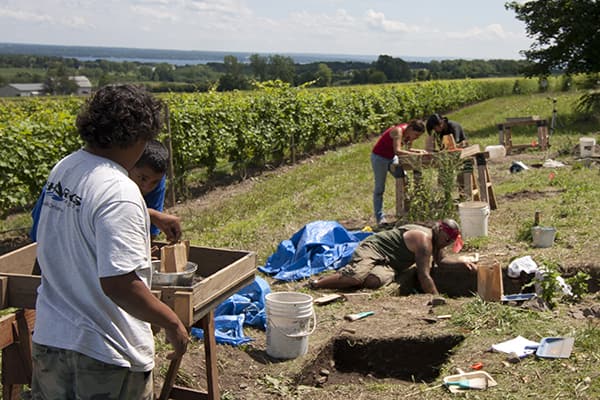